Today, Grammy Award-winning musician Cardi B plead guilty in court after being charged with assault from two fights at New York City strip clubs in 2018.

The 29-year-old artist, whose real name is Belcalis Almánzar, plead guilty to third degree assault and reckless endangerment, both misdemeanors. She agreed to a conditional deal that requires her to perform 15 days of community service.

“Part of growing up and maturing is being accountable for your actions,” the rapper who covered the May/June 2022 issue of ESSENCE with her family said in a statement. “As a mother, it’s a practice that I am trying to instill in my children, but the example starts with me.”

“I’ve made some bad decisions in my past that I am not afraid to face and own up to,” she added. “These moments don’t define me and they are not reflective of who I am now. I’m looking forward to moving past this situation with my family and friends and getting back to the things I love the most — the music and my fans.” 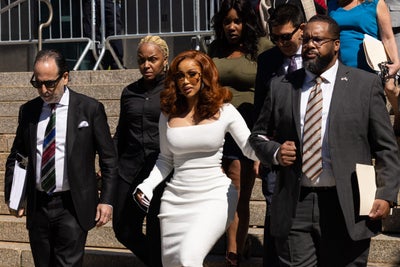 US rapper and songwriter Cardi B departs Queens County Criminal Court in New York on September 15, 2022. – Cardi B appeared in court for a hearing regarding charges of assaulting two strippers. (Photo by Yuki IWAMURA / AFP) (Photo by YUKI IWAMURA/AFP via Getty Images)

According to the New York Times, one of the alleged incidents took place at Angels Strip Club in Flushing, Queens. Two bartenders there claimed that Cardi B told her entourage to attack a woman, claiming she was having an affair with her husband, rapper Offset. The publication also reported that in one fight, chairs were thrown as the group argued with a bartender. She and another employee had minor injuries.

As part of the plea deal, Cardi admitted in court that she orchestrated the attack with her co-defendants Tawana Jackson-Morel and Jeffrey Bush. “No one is above the law,” Melinda Katz, the Queens district attorney, said in a statement. “In pleading guilty today, Ms. Belcalis Almanzar and two co-defendants have accepted responsibility for their actions.”

She continued: “This office is satisfied with the resolution, which includes appropriate community service.”

The post Cardi B Pleads Guilty To Charges From 2018 Strip Club Brawl In New York City appeared first on Essence.

No Man Sky’s 4.0 Update Will Be “Fully Focused” On The Nintendo Switch Launch

My husband is having an emotional affair

Bitcoin Miner Cipher Looks to Sell Up to $250M in Stock

John Fetterman Launches Food Truck To Campaign For Him Across Pennsylvania

The sex act many men expect but then won’t reciprocate