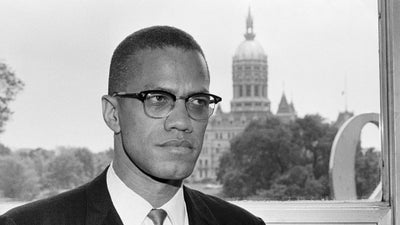 Malcolm X is the first Black honoree to be inducted into the Nebraska Hall of Fame, fifteen years after being rejected as being too controversial.

According to the Associated Press, the organization’s commission chose the civil rights pioneer by a vote of 4-3 over the late author and educator Louise Pound from the University of Nebraska.

“Malcolm X used the lessons he learned early in life and his intellectual power, dedication and perseverance in the fight for freedom and equality for all during the civil rights movement in America,” said commission chairman Ron Hull. “His work and his legacy continue to impact the citizens of the world.”

Malcolm X was born Malcolm Little in Omaha, Nebraska, in 1925. After receiving threats from the Ku Klux Klan, he and his family relocated to Milwaukee the following year.

At the age of 20, he was found guilty of burglary in Boston and given a sentence of almost seven years in prison. During that time, he converted to Islam and changed his name. He launched into prominence as a Nation of Islam minister who urged Black people to cast off white oppression “by any means necessary” before leaving Islam and renouncing racial separatism.

In 1965, he was assassinated in Manhattan’s Audubon Ballroom by gunmen who opened fire while he was giving a speech. He was 39 years old.

Malcolm X was first nominated for Nebraska’s Hall of Fame in 2004 but the commission made up solely of white men did not select him. Instead, according to the AP, they selected a U.S. senator who made a name for himself with a campaign to remove gay men from government posts in the 1940s and 1950s. The selection of Sen. Kenneth Wherry was later rejected due to a violation of the open meetings law.

The civil rights leader was passed over again in 2007 for little-known botanist Charles Bessey. Now, Malcolm X will be immortalized with abronze bust in Nebraska’s state capitol

PrevPreviousMathias Döpfner demanded Adidas pay rent without disclosing he was its landlord
NextDaily Markets: The Fed vs. August Retail Sales and Industrial ProductionNext

Fantom Surprises With 5% Rally In Last 24 Hours – More Gains Ahead?

How Time Magazine, 99 years old, is guiding legacy media into the NFT future

interviewing brother on CNN was conflict of interest