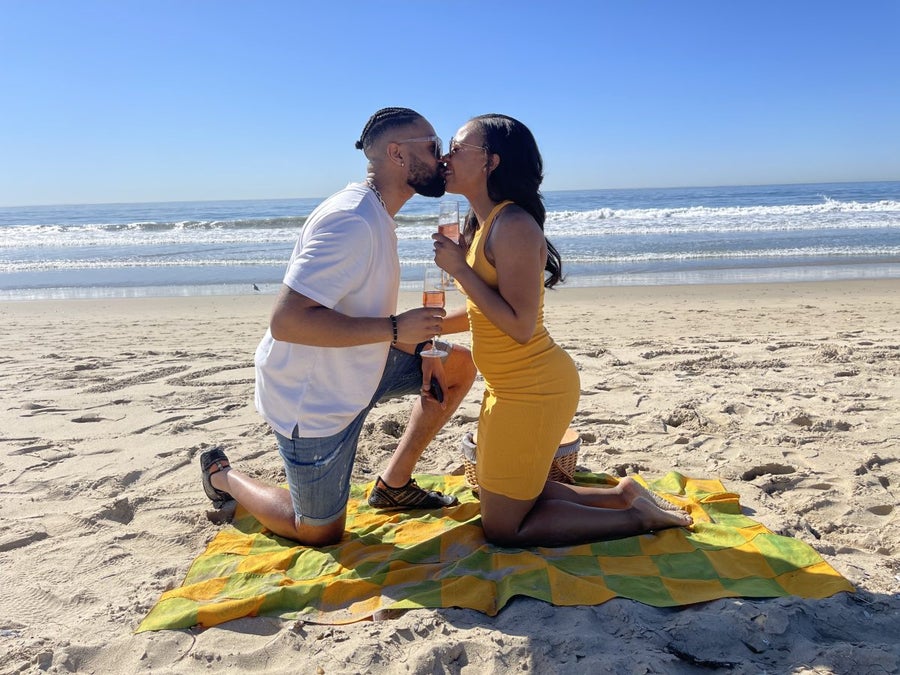 When we think about big, viral proposals, you may immediately recall the couple who got engaged at an Adele concert. Last fall, millions watched vegan chef Ashleigh Mann get proposed to by boyfriend Quentin Brunson at Adele’s “One Night Only” show at the stunning Griffith Observatory in Los Angeles.

“It was a post that I saw online. It said it was looking for someone who was willing to propose to their girlfriend in an amazing, epic way, at one of the most beautiful places in Los Angeles,” Brunson recalls of how he learned of the opportunity. “I knew we were getting engaged probably two weeks before the proposal, but I had no idea of the scale of it until two days before it actually happened.”

For Mann, it was a moment she could never have imagined.

“On the day, Quentin just told me that we were going on a surprise date,” she says. “So I was like, ‘Okay, I’m down for a surprise.’ But I never imagined I was going to get something like this.”

The viral proposal, occurring at one of the dreamiest locales in LA and watched by stars like Drake, Lizzo, Leonard DiCaprio and Oprah Winfrey, is in great contrast to how they met seven years ago.

They had their first encounter at an apartment building. At the time, Brunson was visiting LA from out of town. He was weighing out his options to see if it was worth it for him to make a big move to the west coast. “Ashleigh was one of the first people I actually met. When we connected again two months later after I moved, her energy was familiar,” he says. “She reminded me of back home. That was one of the reasons why I decided that LA may be a good place to move to.”

“When I first met Quentin I said to myself, ‘I have to know everything’ [laughs],” she adds. “I’m a pretty forward person. So I was ready to introduce myself and learn everything I could about him. The day I saw him again after he moved to LA, I was really thinking that we were going to be girlfriend and boyfriend in the future.”

And she was absolutely right. Ashleigh and Quentin became fast friends and soon started spending almost every day together. The friendship grew very naturally and the two began to casually date one other. Then one day, he let everyone know she was his girlfriend, despite them not having a formal conversation about titles.

“I knew that Quentin didn’t want to jump into a relationship right away since he just moved to LA, but I did see some progress with us and I knew he wanted to start to take things seriously when he introduced me to his mom,” she says. “After I met his mom, it was National Girlfriend Day and he posted us on social media. He never called me his girlfriend before that, so I felt that that was a huge gesture. He was not only calling me his girlfriend to me, but he was telling all his IG followers who I was to him.”

So it makes sense that Brunson would use a grand stage to ask Mann to be his wife. This couple’s love story is turning the page for another beautiful chapter and now they’re trying to plan a wedding with the pressure to live up to or outdo their engagement announcement.

“After the proposal, I instantly thought about ‘How are we going to plan this?’ or make this moment even bigger with the wedding? I always go into this mindset of ‘How do I finish the job?’” he says. “We saw how much engagement we received from the proposal, so the expectations for us now are huge. We really just want to make sure that we get to a space where we can provide for our family in the future, leveraging this exposure we received.”

The couple have set their wedding date for 10.10.2022. The wedding will be one year from the proposal and will, of course, occur in LA. They’ve received some support from brands. Mann has been offered two custom wedding dresses from bridal label Justin Alexander. They’ve collaborated with some companies to get wedding essentials in exchange for social media promotion. They also have a Honeyfund in place so friends, family and supporters can help them cover costs as opposed to giving gifts. But for the most part, they’re putting their coins together to make their special day happen.

“I think the hardest part of [wedding planning] is paying for it. It’s definitely no joke paying for a wedding especially when you are doing it yourselves,” she says. “The struggle of having your dream wedding on a budget is very real [laughs].”

But the joy the couple feel about their pending nuptials, and experiencing it with loved ones (no celebrities this time), is what they’re focused on.

“After our viral moment I have definitely felt a lot of pressure to have a big wedding to match!” Brunson says. “At the end of the day, God has been coming through big time and we will continue to trust in him. This process has definitely brought us closer together and we are very excited to celebrate our love with our friends and family. It will definitely be unforgettable.”

PrevPreviousAlien’s Director Will Produce A Movie About Ethereum’s Rise
NextVideo: Let’s Talk About Xenoblade Chronicles 3Next