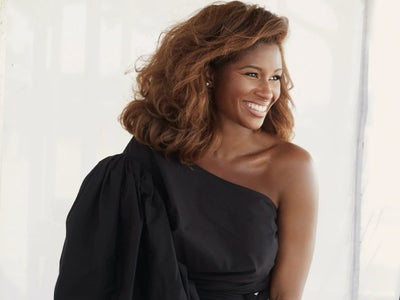 The undergirding theme of the event was an examination of grief, something Noel experienced firsthand when a loved one of hers passed away recently. “I don’t do Fashion Week often, and I only do it when I have something to say,” the designer told ESSENCE.

The show was doubly meaningful—on the one hand, a tribute to lost love, on the other, a statement on something many Black women continue to lose out on: millions of dollars every year.

In the closing look, Fe Noel debuted The Dre$$, a haute couture gown made entirely of faux dollar bills in a representation of the $1.6 million income gap Black women, which acts as a barrier to retirement. The gown is a part of a plan to amplify TIAA’s #RetireInequality campaign. “It’s a structured gown with a solid foundation; the direction of the dollar bills is purposeful; the finishings and corset are all designed to convey strength and structure – something women exhibit,” Noel said in a press release. “This dress… represents women’s strength while also highlighting a very real problem in society – the 30% retirement income gap between women and men.”

Noel also exclusively shared with ESSENCE that it took just eight days for her atelier team to complete the gown: “We were still finishing off the day of the show, but a lot of hands were involved The most intricate part was meticulously folding the bills and placing them in a certain way so that the dress could have movement in life.” The idea was birthed when Noel was approached by financial services organization TIAA to shed light on the issue using her platform. The designer was already in the middle of finalizing her designs for the show, but couldn’t say no when the partnership was presented.

“It was kismet happening,” Noel told ESSENCE, sharing that TIAA’s CEO Thasunda Brown Duckett was already a huge fan of the brand. “She’s an advocate of propelling the same mission that I believe in which is unconventionally speaking up for underserved Black women like me.

The TIAA is a Fortune 100 provider of secure retirement and outcome-focused investment solutions for millions of people working in higher education, healthcare, and other mission-driven organizations. Although they’ve reached many with their work, they realized that through Fe Noel’s platform, they were able to touch scores more.

“New York Fashion Week presented us with an opportunity to bring the retirement income gap to life on a global stage,” Micky Onvural, TIAA’s Chief Marketing Officer told ESSENCE. “Women retire with a staggering 30 percent less retirement income than men. We were able to work with Fe Noel to turn that shocking statistic into a visceral, visible and high-impact learning opportunity. Through this initiative, we are striving to change the conversation around retirement and reach new audiences across age, race and gender about the work that still needs to be done to ensure more people have enough income in retirement.”

The Dre$$ will be on display at 463 Broadway (at the intersection of Grand St.) starting Wednesday through Sept. 20. When anyone posts a photo of the dress with the hashtag #RetireInequality, TIAA will make a donation to Dress for Success.