From Dorm Room to Boardroom: This Founder Launched A Million-Dollar EV Charging Company While In College And It’s Poised To Disrupt CleanTech For Good 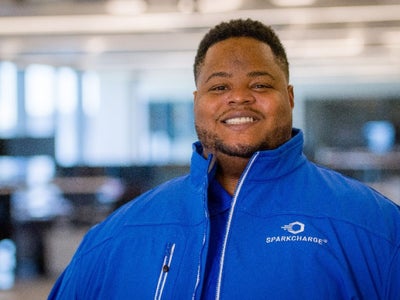 To look at electric vehicle charging maps for major US cities, you’d think Black neighborhoods were wholly uninterested in EVs. ButJoshua Aviv knew that wasn’t the case. And it was only a matter of time before he did something about it.

What started as an idea in his Syracuse University dorm room back in 2014, the school’s student entrepreneurship training incubator, Blackstone Launchpad helped Aviv create a business strategy to create a solution to EV charging desserts: a portable charging device.

“One of my focuses while an undergrad was in environmental economics,” Aviv shared with Essence. “During class, the professor walked in day and said, ‘if you want to change the world, solve the problem of infrastructure for electric vehicles and if you’re interested meet me after class.’ And I was the only person to take him up on his offer. And really, from that conversation, started working on the idea of SparkCharge.”

Aviv said he launched the company to after asking himself the question of “why do we have to go find a charging station? Why can’t the charging station come directly to us?”

After working on building the company for several months, Aviv launched SparkCharge while in college. Now, it’s a multi-million-dollar venture that includes a trajectory-changing investment from Shark Tank in 2020.

“That experience was really pivotal for us,” Aviv said. “We’ve since grown to 50-plus employees across the United States, we’ve shipped product around the world, everywhere from Australia to Japan.”

The growth didn’t stop there.

In May, the company announced a Series A funding investment of $23 million co-led by Tale Venture Partners, Pendulum, entertainer Pusha-T and Summer Watson which speaks to the high-profile solution SparkCharge is providing. And just last month, an additional $7M was raised.

Aviv also mentioned that with the influx of funding, his team is in the process of expanding their Buffalo, New York-based manufacturing plant.

“We just closed the $30 million Series A, which has been really amazing to help the company grow and scale,” he told Essence. “Our mission has always been to help make the world a more clean, sustainable place. Now we’re helping everyone from any neighborhood do that.”

The post From Dorm Room to Boardroom: This Founder Launched A Million-Dollar EV Charging Company While In College And It’s Poised To Disrupt CleanTech For Good appeared first on Essence.