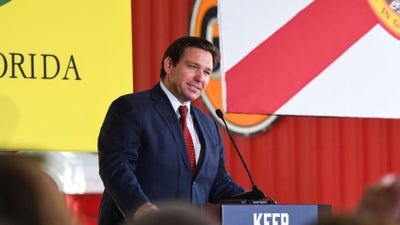 A Texas sheriff has announced the launch of a criminal investigation into the transportation of a group of Venezuelan migrants from Texas to Martha’s Vineyard, Massachusetts, last week.

“Our understanding is that a Venezuelan migrant was paid what we would call a bird dog fee to recruit approximately 50 migrants from the area around a migrant Resource Center … in San Antonio,” Bexar County, Texas, Sheriff Javier Salazar said.

“As we understand it, 48 migrants were lured – I will use the word ‘lured’ – under false pretenses into staying at a hotel for a couple of days,” said Salazar, who said the migrants were then taken by plane at a certain point and flown to Florida before continuing to Massachusetts.

According to USA Today, Salazar, an elected Democrat from south Texas, said the migrants were taken from Texas to Martha’s Vineyard “under false pretenses.” They were “promised work (and) the solution to several of their problems.”

“They were taken to Martha’s Vineyard from what we can gather for nothing more, for little more than a photo op, video op, and then they were unceremoniously stranded in Martha’s Vineyard,” Salazar told the news outlet.

Florida Gov. Ron DeSantis said he was responsible for sending two planes of migrants to Martha’s Vineyard in what his office told local news outlets was a part of a “relocation program to transport illegal immigrants to sanctuary destinations.”

“States like Massachusetts, New York, and California will better facilitate the care of these individuals who they have invited into our country by incentivizing illegal immigration through their designation as ‘sanctuary states’ and support for the Biden Administration’s open border policies,” DeSantis’ office told CNN in a statement.

But critics say the move is a political stunt that comes as the Florida governor is said to be considering a run for higher office.

DeSantis told reporters he intends to continue paying to transport migrants detained at the US-Mexico border in Texas to deter them from settling in Florida. The White House has criticized him and Texas Gov. Greg Abbott for what it says are tactics by the two Republican governors to use migrants as “political pawns.”

5 altcoins that could turn bullish if Bitcoin price stabilizes