It’s been years since John Boyega first heard the concept of a movie like The Woman King, which hit theaters this past weekend. “Loads of people,” he says, were chasing the idea of making a film about the all-female military regime of the Dahomey Kingdom known as the Agojie, but only he received notes from Gina Prince-Bythewood and Viola Davis requesting him to be a part of their movie. As for his decision to accept their offer, Boyega says, “I wanted to bear witness. I wanted to see women doing their thing on a project like this.”

Boyega has made headlines in recent days, sparking controversy where there is none, as he expressed his preference for only dating Black women in a recent interview with GQ. The actor, who was born in Peckham, London, called the reactions “Interesting” on Twitter. “Always thought certain reactions to preference would only occur if you belittle other people while expressing what you like,” he wrote. “This would mean your preference is based on negativity. Yet all I have expressed is my love for cultural familiarity and the positivity I feel. Interesting.”

Interesting is indeed an accurate description when you take into consideration the high esteem with which Boyega holds all Black women, not just those whom he may take interest in romantically. In an industry where many have caught flack for pandering to Black women, his understanding of the space he occupies in relation to the work of Black women is a welcome one. 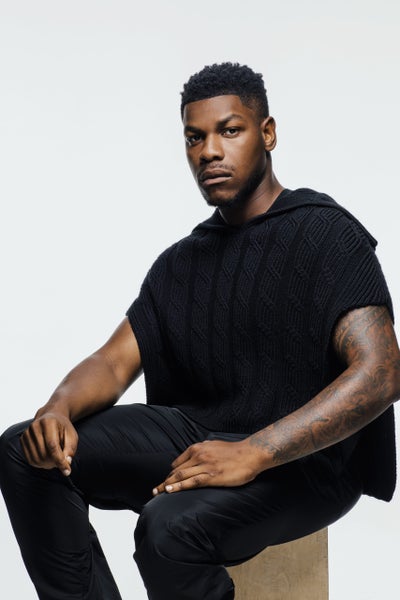 Acknowledging that his preparation for The Woman King was “nothing in comparison” to that of his cast mates Sheila Atim, Thuso Mbedu, Lashana Lynch, Adrienne Warren, and Davis, who trained for hours each day and adhered to strict diets to get in warrior shape, Boyega says he realized an important real-life implication for their work while on set. “All this wanting to fight and take the world comes with responsibility. I was like, you know what? I now understand the other end, when you have to sit back and let them handle it. Just let them handle it. It’s kind of all right.”

In taking that position, Boyega has both a deep respect for the battles Black women choose to fight and gratitude for the rewards he reaps as a result of those efforts.

“When our Black women are winning it opens doors for me as well, ” he says. “It’s not just specific to women. It opens doors for me as well. Especially brown skin, darker women who have their own specific unique struggles, unfortunately. That, for me, was nice to witness. I had my sister who was working with me as an assistant on the movie as well. Every day, to see her react to the scenes that she saw, to see her interacting with Viola, to see that synergy happening, I had to be here just to even witness it. I’m proud of everybody.”

The pride goes both ways as Boyega finds himself in three major projects this year. On August 26, Breaking, which won the Special Jury Award when it premiered at Sundance under the title 892, made its theater debut. In it, Boyega stars as Lance Corporal Brian Brown-Easley, a Marine veteran who robs a bank when he falls on hard times financially.

“Stepping into Brian’s shoes really opened up a whole world of positive things for me,” Boyega says of playing the real-life vet. “It was special and important. I think anytime an actor gets a role that offers you a chance to show your versatility — that’s a challenging role for me as a British actor who has an American accent and has to do some work that is based on a critical skillset– it’s fun and interesting. Anything that feels like it pushes me as an actor and then also makes me learn things as a person is opportunity.” 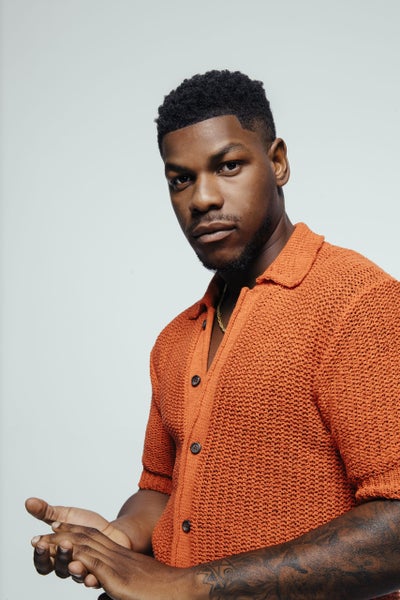 That’s all Boyega has ever really wanted, though he jokes about his motivation for becoming an actor, telling a story of how he was sitting in a lecture in college and heard a loud explosion which turned out to be a part of a filming of Pirates of the Caribbean. At the time he was studying film studies and media writing and was on the fence about pursuing a career as an actor.

With prior roles in the Star Wars sequel trilogy and an upcoming Netflix project, They Cloned Tyrone, with Jamie Foxx and Teyonah Parris, you could certainly deduce that he’s achieved that goal. But fortune — nor fame for that matter — were ever Boyega’s true motives.

“Like anything, any job you go for, you want to have to be able to utilize your finances, and to be able to be rewarded in a good way for what you do. But I always wanted it to be earnest,” he explains. “I didn’t want people to feel like I didn’t deserve to be wealthy. I always wanted it to be like, there is a natural talent there that is worth a good amount so I can take care of me and mine, and then hopefully other people.

“And then for me, it was also the art,” he adds. “I’ve been involved in the art for a long time. The art has played an important part in my life, in terms of freedom in a space where I didn’t always necessarily have it, especially growing up where I grew up. In that scenario, your art is your first love in that sense, the thing that gave you a sense of identity as well. That’s why I was just like, I would rather pursue it seriously, and I’ll also rather come to where the opportunity is, obviously if that country does allow. “

American audiences have certainly welcomed Boyega’s talents, and Hollywood continues to as well, which is an immense feat for an actor who has refused to be silent when it comes to issues of social justice and the Black community. While speaking out “Definitely has its effect,” Boyega says. It’s also allowed him to see where he truly fits in in this industry.

“What I choose to focus on, especially in my thinking, in my maturing up when it comes to these situations, is the good in it. The good in it is that there actually is a filter. It’s like a God-given filter and it shows you who is for you.

“I’ve worked with Juel Taylor, Jamie Foxx, with Viola Davis. We had the opportunity to work with Michael K. Williams and Nicole Beharie. The producers and directors behind these projects are people who I’ve now found and gone, ‘Okay cool, that’s who I’m working with.’ Sometimes it’s true, you’ve got to work with people where you’re appreciated. You’ve got to work where you’re appreciated so that you don’t end up being confused or misconstrued to be something else, to be something you’re not. It’s important for your identity and as you go through any industry, really.”

The post John Boyega’s Adoration For Black Women Shines On And Off Set appeared first on Essence.