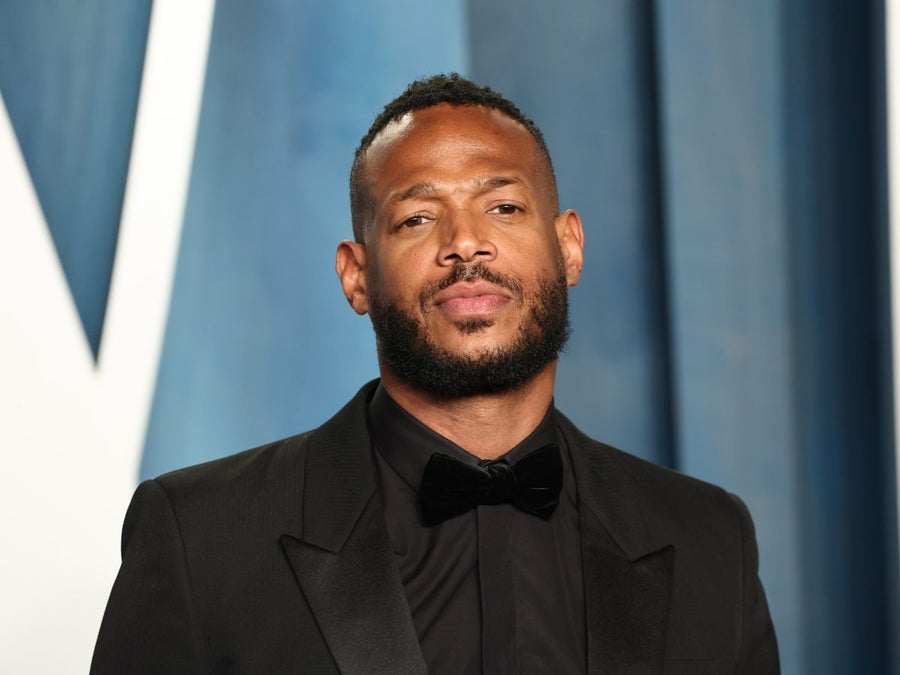 Marlon Wayans is ready to get back on your radar.

The actor and comedian shocked fans with his surprise appearance on Peacock’s hit drama series Bel-Air as Will’s recently-released father. The intense scene between Wayans and actor Jabari Banks blew fans away (and sparked a fair share of online debate) for its display of raw emotion between a son confronting his absentee father about his lack of involvement in his life.

For Wayans, known best for the referential slapstick silliness that defined comedy in the early aughts, the brief-yet-powerful appearance on the show was a more-than-welcome challenge.

“I read the script and I just identified with a character. I felt it. I felt the pain of the father if he never was involved,” he said. “Being a father, I have two wonderful children and I couldn’t imagine what I’d feel – from guilt to anger to hurt to loss – if I weren’t involved. There were so many complex emotions, I thought ‘I really want to play this.’”

His appearance on the show actually came about at the behest of Will Smith himself, who approached Wayans about taking on the part once, believing he’d be the perfect actor to help bring the scene to life.

“That’s what I love, is it’s such a construct of the man that I am, from the father that I’ve been, from the human my parents raised me to be. I just felt like it’s something different, and when people have confidence in your abilities to do something, I think to show up.”

Showing up for the role also meant showing up for his co-star Jabari Banks, whose turn as Will on the smash hit reimagining of the Fresh Prince story is also his first-ever professional acting role. With 30 years of acting experience under his belt, Wayans naturally imparted some of his knowledge on the young actor, primed in a position for stardom.

“Of course, I’m always a teacher. Every time they said cut I had a different jewel for him. I had something to teach him. I had a gift, some kind of jewel to give him, because he’s going to need that. And I had so many people give me so many great jewels. My brother [Keenan Ivory Wayans], Eddie Murphy and Chris Rock, Martin [Lawrence], Will [Smith] and so many before me. It’s only right that I do the same for the younger guys. And he listens well. And I learned from him. That little boy’s astounding! He can rap. He can sing. Play piano. I was like, ‘How’d you learn all that? I want to be like you when I grow up.’”

The role, especially that pivotal season-ending scene – which Wayans lauds for how well-written it was – was a perfect storm of opportunity for the actor, who’s recently rediscovered his focus on dramatic acting.

“For me as an artist, there’s so much I can do just from comedy to drama. It’s a complex character and looking at this, I could kind of really bite down and explore all the different levels of what I could do dramatically. Some roles just speak to you. This one spoke to me.”

Wayans saw this role as a prime opportunity to sink his teeth into a gripping dramatic role, allowing many fans to see him in a new light. Though the youngest Wayans brother is a classically trained actor – he studied drama both at New York’s famous LaGuardia High School of Music & Art and Performing Arts and Howard University before stepping out into the entertainment world with his brothers and sister. Though he’s tackled several dramatic roles, from Requiem to a Dream to Respect, many fans’ first thought when it comes to the actor is his hit 90’s sitcom The Wayans Brothers, the highly successful Scary Movie franchise, or even his cultural classic comedy White Chicks. But Wayans is ready to change that.

“I’m 30 years in the game professionally and I get to show different looks to different sides of my ability,” he said. “And I’m just getting better.”

Though he’s looking to dive deeper into drama, the actor is naturally never done with comedy. He has an upcoming comedy special for HBO Max called The Headliner, in which Wayans serves as the comedy opener placing spotlight on five different comedians that have each opened for him at some point during his stand-up comedy touring.

He also has Boo, an upcoming Netflix family Halloween film that he produced and stars in. The father/daughter adventure story finds him and co-star Priah Ferguson of Stranger Things fame moving from New York to Massachusetts and end up unleashing an ancient spirit that brings all the town’s Halloween decorations to life. To top all of that off, he’s also on tour this summer, touring the US on his stand-up tour starting April 30. You can grab tickets HERE.

With everything already on his plate and even more in the works, Wayans feels that now, just a few months shy of his 50th birthday, things are finally falling together for him on all fronts of his professional endavors.

“You get to this place where you get in your bag. I’m in my bag as a producer, bag as an actor, bag in my comedy game. These are my years. I’ve been working so hard for 30 years and now it’s all clicking,” Wayans said. “I love the fact that I get to show up as the star that I’m prepared to be.”

“We all arrive at different times in our lives and I feel like you have to beready for whatever prayers you’ve got out there,” he said. “And I’ve been doing the work, so I’m ready. I’m definitely looking forward to doing a lot more drama, a lot more romance, and really putting it down these next 20 years – until I start looking old and crazy.”

The post Marlon Wayans’ Next Chapter appeared first on Essence.

PrevPreviousWhy This Bitcoin Correction Was The Most Painful Yet
NextLBank Exchange Will List Crogecoin (CROGE) on April 24, 2022Next

The Buffalo massacre screams for the death penalty