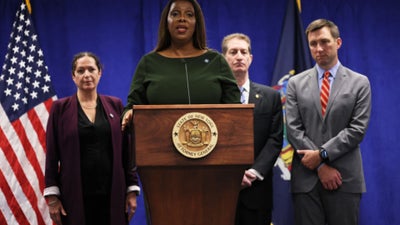 The civil lawsuit, filed Wednesday in State Supreme Court in Manhattan, seeks to make Trump pay $250 million in fines, ban the family from operating any New York businesses in the future, and ban the former president and the Trump Organization from buying commercial real estate in New York for five years. In addition, James’ office says it’s making a criminal referral to U.S. prosecutors in Manhattan and the IRS.

“For too long, powerful, wealthy people in this country have operated as if the rules do not apply to them. Donald Trump stands out as among the most egregious examples of this misconduct,” James said in a statement.

The lawsuit claims that the former president inflated his net worth by billions of dollars with the help of his children and the executives named in the filing in order to persuade banks to lend money to the Trump Organization on more favorable terms and to obtain other economic and tax benefits.

“With the help of his children and senior executives at the Trump Organization, Donald Trump falsely inflated his net worth by billions of dollars to unjustly enrich himself and cheat the system,” James said.”In fact, the very foundation of his purported net worth is rooted in incredible fraud and illegality. Mr. Trump thought he could get away with the art of the steal, but today, that conduct ends,”she added.

The lawsuit is the result of a three-year investigation into the Trump Organization and its executives. According to James’ office, the Trumps used “fraudulent or misleading asset valuations” in order to secure loans, insurance coverage, and tax deductions, and that everyone involved in the lawsuit (including Trump’s children) was “directly involved in one or more transactions.”

Trump has denied any wrongdoing and has called James’ investigation a politically motivated “witch hunt” by a “racist” attorney general. According to ABC News, James, who is black, rejected a settlement offer from the Trump Organization to settle the dispute last month.

PrevPreviousEdith Yeung: Crypto Is Not in a Terrible Place
NextHow to stake Fantom (FTM)?Next