It’s not lost on the cast of The Woman King that they are telling a story outside the Hollywood norm. For Sheila Atim, Lashana Lynch, and John Boyega, having the opportunity to tell a historical tale of Black life that does not involve living or escaping plantation life in the Southern United States or battling Jim Crow laws is an exciting opportunity.

As Dahomey’s King Ghezo and his women warriors, the actors get to show us a lesser-known slice of life that sees Black people living and thriving in their own societies, with the transatlantic slave trade a distant concern in the background instead of the primary focus.

For Atim, who plays high-ranking warrior Amenza, it was a rare opportunity to focus on the diversity of Blackness and highlight that there are myriad stories from our past that we haven’t tapped into in film. 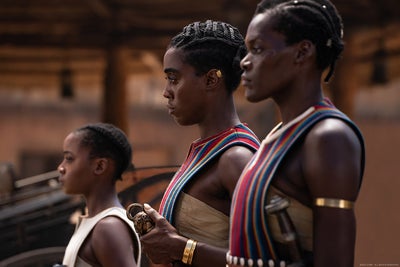 “One of the really beautiful things about this film is that it is set on the continent, it was made on the continent, and features so many different people from all over the Black diaspora around the world,” Atim tells ESSENCE exclusively. “There are so many opportunities to tell stories about us. There are so many of us in the world and though we’re all similar and bound in one sense, we’re very different as well.”

“I think it’s really important for us to not restrict ourselves, to keep on pushing, to keep reminding ourselves that all the different aspects of our histories – plural – are valid, have something to teach us, and have something to entertain us as well.”

Lynch, who portrays fierce yet warm warrior Izogie, said that on top of telling a story about Black life that audiences aren’t quite as familiar with, she’s happy it was told through a Black perspective.

“It’s beautiful to be a part of something that pushes against the white gaze that we’re used to adhering to,” Lynch adds. “It takes a Black cast and a Black director – Gina Prince-Bythewood, a Black woman who is fighting for her Black actors– to remember that it’s a collaboration. It’s a responsibility, and I want to take that responsibility so that the correct stories to be told, like this one, are in the right hands.” 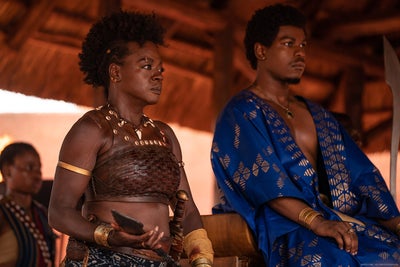 “I second that and support that,” Boyega adds. As King Ghezo in the film, he is in a rare position in Hollywood: playing an African king.

“I’d really like to see the industry inspired by such a story, inspired by bringing so many great actors and actresses together. And also, to continue exploring the continent for more stories.

“That’s something that’s been special for all of us, to be a part of something that adds to that conversation and hopefully adds to the momentum, because the next 10 years, I am not going to be in an industry that’s the same as how it was before. That’s not happening.”