‘Silence The Noise:’ Stars Share Their Top Work Philosophies For Making It In Hollywood

Without a doubt, every award show there’s a Hollywood hopeful watching the ceremony from home asking themselves what they have to do to make it there one day. And while it goes without saying that hard work is an essential piece of the equation, we know there are certain work philosophies and business practices that also guide the cream of the entertainment crop.

With that in mind, we asked stars on the 2022 Emmy red carpet Monday night which of those principles landed them at the 74th annual award show this year and the responses were rather insightful.

“I’m going to be honest and I’m going to say kindness and I really mean that,” writer Ashley Nicole Black told ESSENCE. “It might sound like a cheesy answer, but I must say everyone that I work with, they go, ‘Oh, nobody has anything bad to say about you,’ and I think that’s what gets me to the next gig. So just be kind.” 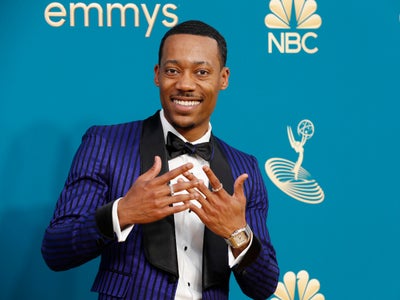 Black, who is a producer on the hit Apple TV+ series Ted Lasso, which won the Emmy for Outstanding Comedy series this year, added, “Being authentic, being genuine with people, to me, is the only way to truly be kind.”

Tyler James Williams, who was nominated for an Emmy for Outstanding Supporting Actor in a Comedy Series his role on Abbott Elementary, had a different word of advice. “Silence the noise,” he said. “There’s going to be a lot of noise. People telling you what you need to do, what’s trendy. If you know what you’re here to do, silence the noise. Stay focused.”

Check out more tips from Anthony Anderson, Colman Domingo and more in the video above.

The post ‘Silence The Noise:’ Stars Share Their Top Work Philosophies For Making It In Hollywood appeared first on Essence.