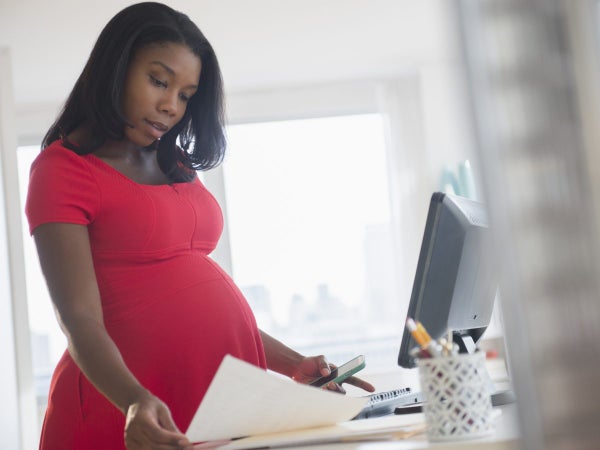 The Black Mamas Matter Alliance is calling on Senate Majority Leader Chuck Schumer to help put an end to the discrimination Black pregnant women face while on the job.

The organization recently drafted a letter to Schumer and asked him to bring “the Pregnant Workers Fairness Act to a vote without delay.”

Angela D. Aina, the Co-Founding Executive Director of Black Mamas Matter Alliance told ESSENCE, “Black women have among the highest labor force participation rates in the country and 80 percent of Black women are their family’s primary breadwinner. Nearly thirty percent of pregnancy discrimination complaints are filed by Black women. This is because of the multiple forms of discrimination Black workers and other workers of color too often face in the workplace.”

The letter stated that as a result of discriminatory practices in the workplace, “Black mamas and pregnant people are suffering both economic hardship and negative health outcomes due to pregnancy discrimination and the lack of support in their workplace.”

Dina Bakst, the Co-Founder and Co-President of a Better Balance told ESSENCE that, “Black pregnant workers are disproportionately denied reasonable accommodations required to maintain a healthy pregnancy on the job.”

She continued, “Black pregnant women who work in low wage and physically demanding jobs too often must risk their health at work or get pushed off the job when pregnant or after giving birth.”

“Systemic racism appears in many forms, especially in the workplace. For example, we see it in the stark lack of access that many Black birthing people and pregnant workers of color have to critical supports like pregnancy accommodations, paid family and medical leave, and child care access,” Bakst stated.

She added that Black pregnant women are“less likely” to be offered these types of workplace policies.

The alliance believes the Pregnant Workers Fairness Act will minimize the risk Black pregnant women face while on the job and will grant them better economic security.

Aina stated, “one piece of legislation cannot overturn systemic racist practices in the workplace overnight. However, this critical legislation will enable pregnant workers, particularly Black women, to ask for and receive accommodations that are reasonable and timely to stay healthy and remain employed.”

The post The Black Mamas Matter Alliance Is Asking Chuck Schumer To Help With Workplace Discrimination appeared first on Essence.