What’s In The Inflation Reduction Act?

WASHINGTON, D.C —Hundreds of lawmakers and guests gathered at the White House on Tuesday to celebrate The Inflation Reduction Act, a health care, climate and tax package that was signed by President Joe Biden in August after almost a year of back and forth negotiations between Democrats in Congress.

President Biden and Vice President Kamala Harris walked out to a cheering crowd on the South Lawn of the White House to commemorate the accomplishment. The event kicked off with a musical performance by James Taylor and speeches by Senate Majority Leader Chuck Schumer and House Speaker Nancy Pelosi. 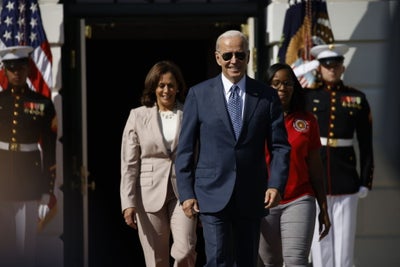 US Vice President Kamala Harris, from left, US President Joe Biden and and Lovette Jacobs, 5th year International Brotherhood of Electrical Workers Local 103 electrical apprentice, arrive to an Inflation Reduction Act event on the South Lawn of the White House in Washington, D.C., US, on Tuesday, Sept. 13, 2022. Biden is trying to capitalize on a sudden spate of positive economic news to turn Democrats’ biggest political liability into an unlikely election-year selling point. Photographer: Samuel Corum/Bloomberg via Getty Images

In their remarks, Harris and Biden highlighted some of the administration’s efforts in the areas of healthcare and climate change including the record $360 billion investment in energy and climate initiatives. The President and Vice President also highlighted how the new law will help to reduce the cost of prescription drugs like insulin. Currently, Americans typically pay two to three times more for prescription drugs than citizens of other countries.

“The Inflation Reduction Act will help millions of Americans build a better future for themselves and for those they love,” Harris said. The vice president also spoke directly to how the law will directly address the issue of climate change. 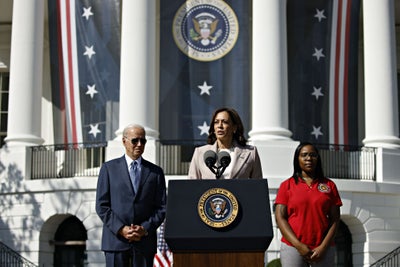 “For decades our nation has failed to meet the climate crisis with the urgency it demands. However, because of you,  members of Congress, state and local officials, labor leaders, climate activists and because of our President Joe Biden America is leading on climate not just with declaration but with action,” she said.

The historic legislation was signed by Biden on Aug. 16. It aims to lower healthcare costs, address climate change, cut the deficit, and increase taxes on big corporations. It represents a long-sought major legislative accomplishment for Democrats as they hope to keep control of Congress as midterm elections approach in about eight weeks.

During the celebration, Biden called out the lack of Republican support for the legislation and said that he would provide relief to families struggling with rising costs from inflation.

“I believe Republicans could’ve and should’ve joined us,” Biden said Tuesday. “In the end, every single Republican voted against this historic law,” he said.

“We’re here to talk about things that matter to families: lowering costs, creating jobs and helping them make ends meet,” Schumer said. “What are the MAGA Republicans doing over in the Capitol today? Introducing national bans on abortion. Just unbelievable.”

The Inflation Reduction Act aims to lower greenhouse gas emissions, support clean energy technologies and lower the cost of prescription medications. By imposing a 15% minimum  tax on corporations— creating over $1 billion in revenue— and a new excise tax on corporate stock buybacks, the legislation is predicted to raise more than $300 billion in revenue.

However, the legislation, which is a scaled down version of the $1.5 trillion Build Back Better Act which failed to pass the Senate, did not include many of the priorities that Democrats had hoped to see in a significant spending plan, such as universal pre-K and paid family leave.

After Biden signed the bill last month, members of his Cabinet and other administration officials have been out on the road to promote it. According to the White House, officials plan to travel to 23 states to promote the law. VP Harris is expected to speak at the University of Buffalo on Wednesday about the law.

The celebration follows a report released Tuesday showing that consumer prices remain high despite a slowdown in inflation. According to the most recent Consumer Price Index report, prices were 8.3 percent higher in August than they were a year earlier.

The post What’s In The Inflation Reduction Act? appeared first on Essence.